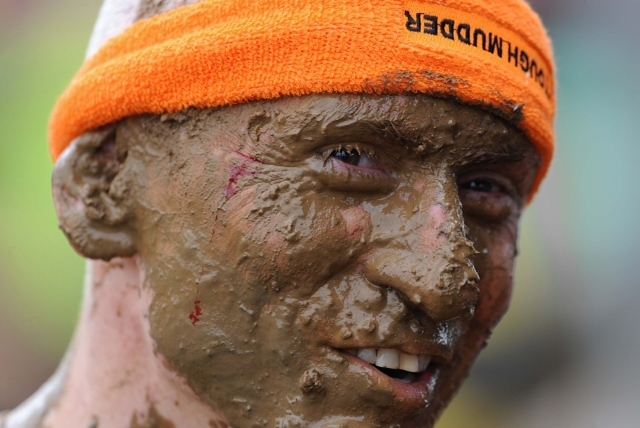 We took part in Tough Mudder .. It was tough especially at
the last obstacle that was these wires hanging down waiting to give you quite a
jolt . Paul got a good one and blacked out down in the mud because I was behind
him I went down as well , as I was l trying to crawl through the mud someone
fell on my head and squashed my face right in to the mud so I had mouthful as I
tried spitting it out I was getting more shocks .. Great fun !! 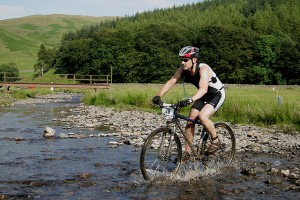 For any who don’t know an adventure race is a mix of action and orienteering. You get a map at the start and a set time, in this case 5 hours, to get about on by MTB and running to find and dib as many spots as possible. It can be done as a solo or paired effort. The harder a dib spot is to reach the more it scores. Most points wins, points docked for every minute over the 5 hours. As much effort as you want to put in, or not. Some people hurtle round, others take it more sociably.

Keirnan bravely joined me to form a mixed pair and we set off in his nice warm car for a fun day out on the Surrey Hills above Dorking (familiar to those who enjoyed the MTB jaunt a few weeks back) in spite of a forecast of heavy rain all day. I don’t think I quite promised Keirnan it would be a picnic but I’m sure I didn’t suggest it would be a polar expedition!

We decided to MTB first and set off in moderate rain and good spirits, heightened by doing one of the purpose-built MTB runs early on and collecting a load of points. The skill is to plot a looped course for maximum efficiency and we did our best on this and also to go up the roads and down the trails.

The rain got heavier, the trails slippier, our hands and feet more like ice blocks but we were still going strong. Then Keirnan’s brakes started to give up on him which meant he had to coast/run/slither down the hills – which he did amazingly cheerfully. On the home stretch he also got a puncture so now he was running all the time – in bike gear and pushing his MTB. Back at transition – a section of forest track so designated, nothing fancy about these races – we stripped off our sodden bike gear and gratefully put on dry socks and running shoes. I was shivering so much I couldn’t hold the running map still enough to look at it but Keirnan had a steady hand and we looked forward to getting warmer on the run.

By now the trails had turned into streams so the dry sock effect didn’t last long and the going was treacherous. Keirnan wiped out at one point but shook himself and carried on regardless. However, as we crossed a piece of open country he pointed out that the rain had turned rather more solid. Sleet! The most evocative word in the bad weather lexicon. And after another ten minutes it was snowing, quite hard, the flakes whirling round in every direction before melting into the muddy streams around our ankles. We had definitely gone beyond eccentric by this point… As everyone picks their own route we kept meeting people going the same way or the opposite way and then diverging again. We all grinned at each other with mud-splattered, snow-blown complicity: you too, hah!

The time was getting on and we set off for a welcome return to transition and only a 4km down hill bike ride (hmm, Keirnan’s bike – how is that going to work?) between us and the base with its glowing promise of warm food and clothes. But at that crucial point our navigation skills, which had been pretty good up to now, deserted us (or rather me). Nothing to do with frozen brains of course but we kept heading South when we should be have been going East.

Finally we found a road and headed back to transition – not quite last but nearly so. And half an hour over time, so all those hard won points were taken away again – it’s a cruel game. Something like 340 minus 310! Then poor Keirnan had to wait while I cycled back and fetched the car. And I couldn’t drive the car till my hands had thawed. When I got back I was glad to find him not quite hypothermic and wrapped in one of the race official’s hi-tech ski jackets. Back to base for those warm clothes and food and a very cosy drive back to London. I have never been more grateful that we didn’t take the train.

Huge thanks and admiration to Keirnan who was incredibly game, stalwart, uncomplaining and all round heroic. Next time we’ll get back inside the cut-off, I promise. What do you mean there won’t be a next time? 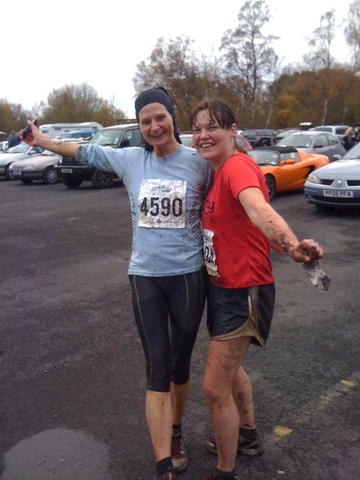 Great cross country race, 10 miles of trail, banks, bog and slop! Big thanks to Olivia for encouraging us to do this and for driving, much appreciated!

So myself, Olivia and Kev headed early this morning for the race, grey clouds but fortunately no rain. Off we went and collected our timing chips, reluctantly removed our layers (all of us having the strategy of less is best!) and swiftly made our way to the front of the start line.

So we were off and Olivia and I wished Kev good luck, we knew we wouldn’t see him again unless he got stuck up to his neck in bog somewhere!

First 2 miles were fairly easy, just trail, gentle inclines in the forest and mostly avoidable puddles. It always takes me a few miles to really settle into
my run so until I did I just dropped back from Olivia but tried to keep her in my sights. And then came the slop! Unavoidable trenches, waist high in muddy    water. No doubt the photographer had a field day, the first real plunge of the day and I couldn’t stop laughing.

We went for another 6 or so miles, through muddy water filled trenches, narrow rivers, rancid smelling bog, up and down steep banks on our hands knees or backsides (which ever deemed appropriate) and along sandy trails with shoes now so heavy it felt like I was wearing 2 pairs. Then mile 8… the Turbo X part… A separately timed part of the course, a mile of serious bog (being from the west Ireland I feel fully justified calling this serious bog). Olivia and I are running together again but now her longer legs are much better at tackling the depths of the bog than my stumps. It was hilarious, literally waist high in thick shoe sucking bog and I’m screaming with laughter so much that one girl asked me was I ok as she thought I wastrouble… I’m fine just laughing so hard I can’t move…Loved it!

There is a mile or so to home where we are weaving through the forest trails with teasing glimpses of the finish line. I managed to catch up with Olivia ‘s long legs and we finished close together at I think around 1hr 39min. Kev of course, as expected, was back at the car and changed by the time we waddled over.

Jonny, we asked one long haired, bearded guy if he was you and had our eye out but didn’t come across you, hope you had a good day anyway!

Brilliant day out, so much fun and I think the attached picture says it all!