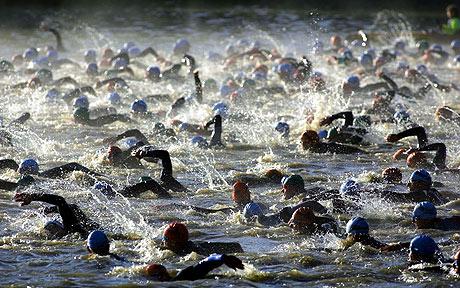 While many of you are preparing for Lanza, some of us can only dream of such achievements maybe in some far away future.

Nevertheless I thought it might be interesting to post a race report from a tri more close to home and of a distance more suitable for beginners like myself.

Last Sunday, the 8th of May, I participated in my first triathlon: the HSV St Albans sprint triathlon.

Since there was no information as to when racking and registration would start (only that it would close at 6.15am), I dragged my nervous self out of bed at about 4am; only to arrive at St Albans at 0500 and noticing they still needed a hand in setting up transition.

Nothing more therapeutic to get rid of those “first timer”- nerves.

After registration, painting (made me feel immediately like the real deal), a meticulous transition set-up of my gear and a short race  briefing it was time to get ready for the swim.  As swimmers were seeded by estimated swim time over the 400m pool swim (with the slowest first and with 15sec intervals), I got even more nervous.  Was the time I entered too optimistic? I started as number 115 and I noticed that almost every athlete lined up behind me displayed a tan, that this early in the season could only be explained by Club La Santa-like training camp experience!!!!!!!

Within the next few minutes, while I waited for my start time, I managed to pull myself together: I too put in the training! And whatever was going to happen in the next hour and a half or so, I was going to do everything possible not to shame the Tri London kit I was wearing.

3..2..1… and I was off and fairly quickly found a good rythm that by a quick glance at the huge timer overhead was rather fast as well.

But being faster than I imagined soon proved to have a downside.  As I catched a few swimmers before me they kindly let me pass at the turns after a gentle tap on the feet.  Until I met mister “the Greenwich meridian runs trough my ass”!  He refused to let me pass!  I must have tapped whole sentences in morse code on his feet.  And I can assure you some of those where not for publication!

Even after being told by marshals to let me pass, he just would not give way. So decided to draft on his feet and buried my frustration, only to be happy to exit the water 20secs faster than I ever did before on that distance.

T1 felt slow. And it was! Clearly I need a lot more training at this than those  I did in my backyard.

After leaving transition it was at least another 300m run on concrete to the mounting point; my cleats barely survived!

On to the bike. Since I did a recce of the course the day before by car I new what was coming and what to expect.  I can tell you it looks and feels a lot different when it rains like you’re in the shower.  I decided to power on on the straights, but be very conservative on every turn and roundabout.  Although this took a lot of energy accelerating after them every time, I’m happy I did, looking at the amount of road rash I saw on fellow athletes after the race.

After 13k (yes I know) I thought disaster struk: my right calf gastrocnemius muscle totally cramped up.  For a few seconds I thought my race was over.  But then I remembered a race report on the site from a far more experienced club member and geared down and by pushing my heals down and with the increased cadence the cramp gently came down.  Although this costed me a lot in speed, I was very happy with how I handled the situation and was able to continue.

At least T2 felt, and was, a bit faster.  But here again a lot of training is still needed.

On starting the run I was prepared to feel the ever famous jelly legs, but nothing could have prepared me for what I felt next.

No jelly legs, legs felt fine!  My abdominal muscles and I even think maybe a part of my diaphragm were fully contracted!

I couldn’t run in any other way than leaning forward and my breathing was horrible: I could only hyperventilated on the top of my lungs.  The feeling was horrible!  Was it due to the tuck down during the bike on the aero bars, I don’t know.

If there’s anybody amongst you who had this and knows how to avoid it, please let me know ’cause I never want to feel that again!

Needless to say I was very disappointed with my run, as it took half of it to get rid of this cramp and by then my time was far below what I know I can do.

After finishing though I had to be satisfied: 1:10:40, nothing to be ashamed for for a first tri!

I learned a lot and am hungry for more.

Even more good news came the day after when the results were emailed: 14th overall and 4th in my AG.  Although it was a very small, local tri I was happy with the result and proud to have represented Tri London in this way.

So let me end with a big thank you Tri London, you have made me hooked to this sport for life!