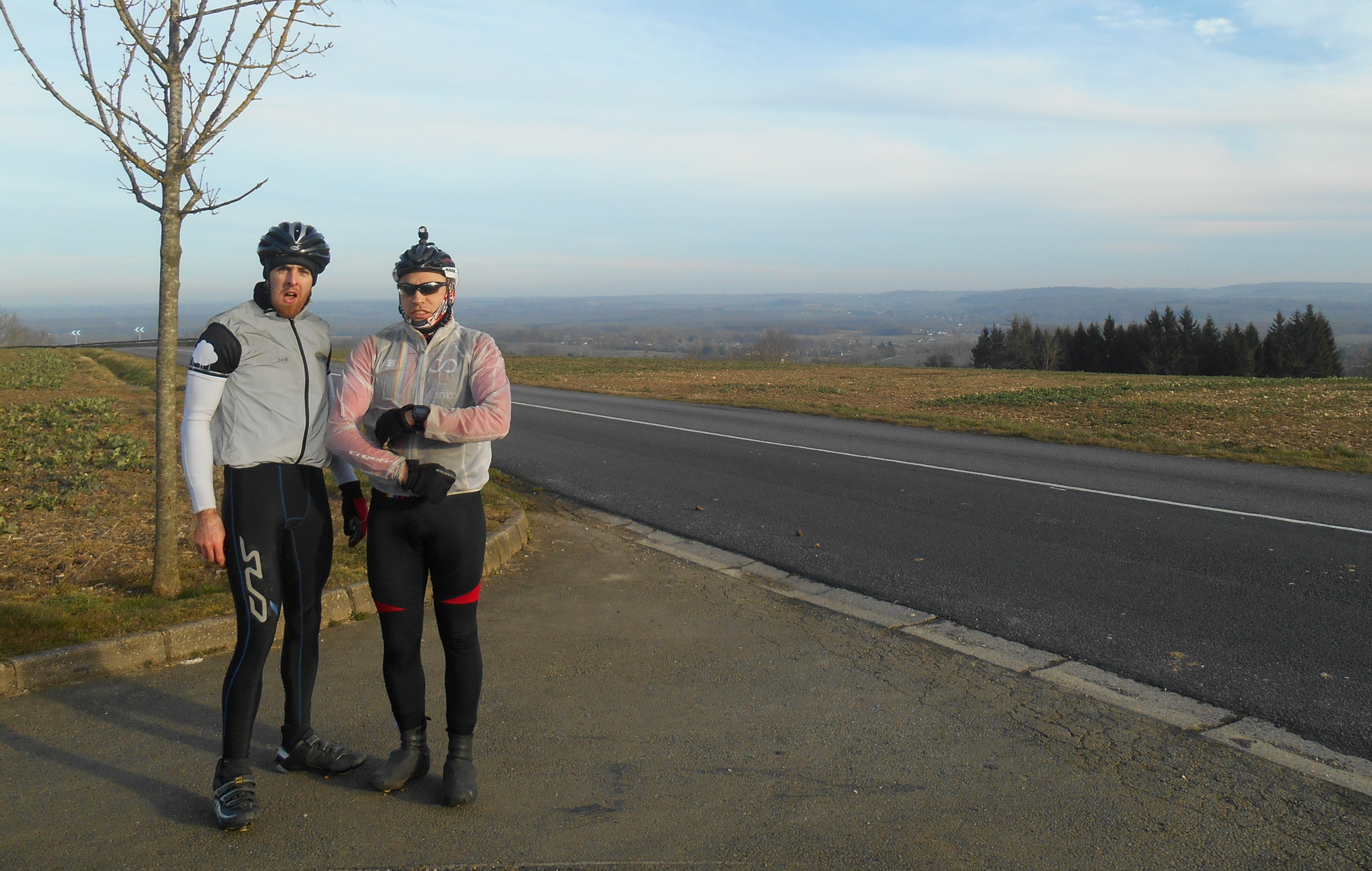 While some of us were taking the easy way out and enjoying a fun weekend in Paris with a couple of hours running, Ciaran and Alan decided it would be more fun to cycle to Paris and back rather than take the Eurostar. Ciaran wrote up some words about their epic trip.

A bit later than planned but I’d just like to say a huge thanks to everyone that made last weekend in Paris so memorable. From Jonathan taking my clothes, everyone waiting for our arrival at the cafe, Sam & Jo for the company at dinner, Sophie for lending me her Garmin to get home and of course Mr Bruce for planning the ride and listening to me talk absolute tripe about fruit and eggs all the way from Dieppe.

You can skip to the bottom for the summarised version.

Unfortunately the weekend didn’t go exactly to plan in regards to the cycling but once we got out of the London Friday rush hour traffic it was plain sailing all the way to Newhaven on some fairly poor roads but that seems to be standard everywhere in England at the minute. 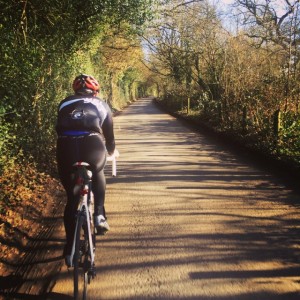 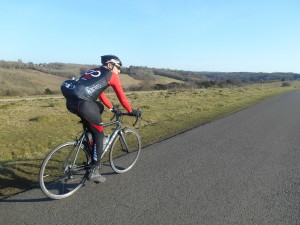 The Arc pub in Newhaven were very accommodating storing our bikes, providing a good dinner and a nice seat in front of the fire. The pub was even big enough to hold the mass of cables, plugs and miscellaneous objects Alan had decided to carry in his jersey. He also mentioned that the last time he crossed the channel with his bike he had to stand in the cold waiting with the rest of the ferry traffic for a couple of hours however this time we were considered VIP’s and were first on the boat. 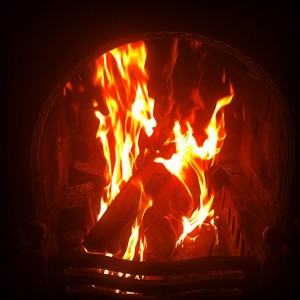 Although we found some comfortable seats we both struggled to sleep but the sailing went by quickly and we were soon on the smooth road out of Dieppe to calls of Allez!! from some drunken revelers at 4am. As we got moving again our thoughts turned to breakfast however this turned out to be a difficult proposition and it wasn’t until 730 that we sat down to coffee and croissants just outside Gournay-en-Bray.

Once I had shaken off the cold and got my hands working again we moved on to look for a more substantial breakfast and my prayers were answered by the yellow arches showing a McDonalds was close by. I’ve only ever had McD’s 3 times however with the promise of eggs and a decent toilet I was now their biggest fan. Alas it was too good to be true as they weren’t open until 10 and we just couldn’t wait that long so we kept moving.

It was 11am before we got breakfast in Fleury which consisted of a medium baguette each and a second coffee meaning I had drank more coffee that morning than I had done all year. I also managed to get some fruit in the supermarche to get some fibre into my body and help it digest the stodgy bread and flapjacks we had been eating all morning. 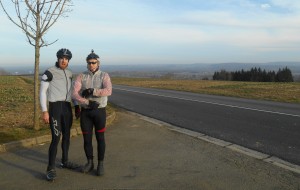 We completed a few decent climbs before reaching the town of Marines and were now only 50km from Paris. A fast descent down Hautil into Vaux-sur-Seine left us on the outskirts of the city before we cruised along the wide boulevards of northern Paris at almost 40kmph. The traffic gradually increased as we got closer to the city but it wasn’t really an issue until Alan crashed and damaged his bike, leaving it unrideable. 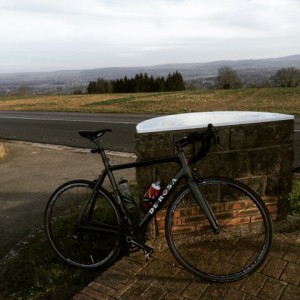 With a little help from a local cyclist we found a train station and continued to our destination in central Paris. We finally met up with Chris, Amy, Sophie, Jonathan and John and were happy enough as we tucked into omelettes and cake. No one was really up for much so we spent the afternoon at the cafe which was very pleasant before making our way to our hotel for a much needed wash. I got some very weird looks as I walked through central Paris looking like a sporty lycra clad homeless guy pushing a bike with no shoes on and the straps on my bib shorts rolled down.

Alan led the way to the hotel and I was very relieved when we got there however my heart sank as the receptionist informed us we were at the wrong Best Western. Luckily the correct one was a few doors down and so we checked in, stored our bikes with some great difficulty and finally got round to washing off 300km of dirt.

That evening we had a relaxed pizza dinner while I mulled over what to do about the ride home. I considered staying another day to enjoy Paris and recover a little more but soon realised if I spent the day there I would be on my feet cheering everyone running the half marathon and stuffing my face with cake, not the best prep for a ride back to London. I eventually made the decision to ride back solo and so I stocked up on fruit, charged all my electronics back in the room and got some much needed rest.

The next morning Alan and I had an American breakfast and an emotional farewell as I set off for home at 830. I was disappointed that we weren’t riding back together but I soon forgot about him as the wide, traffic free streets of Paris allowed me to open up and get my legs moving. While stopped at some lights I casually looked around and noticed I was right next to the Eiffel Tower, a very impressive structure in the flesh, and before I knew it I was ‘sprinting’ down the centre of the road to the Champ d’Elysee towards the Arc. 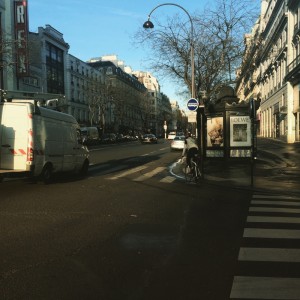 I had 40km covered by the time I got out of the city and was at the base of the Hautil climb which seemed to be substantial when we came down it but turned out relatively easy to get back up. I had planned to stop in Fleury again for a break after 70km but felt good so continued to the next village and stopped for a water top up before powering on along the smooth French roads to Gournay-en-Bray.

I remember passing a nice fruit stall in this town the previous morning but it was now closed so I asked a local on a bike where I could find some fruit et legumes. He proceeded to take me back the way I had came and after following him for 7-8 minutes I abandoned and found a supermarche myself.

I filled my belly with chicken, bananas, milk and an almond croissant and felt good so got back on the road. The wind was non existent and the roads rolled and so I maximized the gravitational force on the declines and powered up the slight inclines, riding on my limit for around 90 minutes towards Dieppe. Then about 25km from Dieppe a headwind picked up from the north west and completely killed my speed and my will to keep pushing hard.

I arrived in Dieppe at 1545 and had plenty of time for another pizza before making my way to the ferry port for the 1800 departure. I had ordered quite a large dinner in the pizza place so decided to have it wrapped up and brought the remaining half and some bolognese with me to the boat. As I showed my passport to immigration at the terminal they joked that making border crossings with pizza was not usually permitted however they would turn a blind eye this time. It would have taken the armee de terre to remove that food from my possession.

Once again I found a good spot on the boat and remembered Chris Wilsons tip so I proceeded to remove the base cushions from some seats and made myself a little bed on the floor which was great. I took a walk and plenty of water at regular intervals during the four hour crossing to avoid stiffening up too much and also managed to get some sleep and finish the rest of my dinner. During the entire crossing I thought about how my days riding could be done and how I could easily make the 2130 train from Newhaven  to Victoria and be home before Sunday ended.

I just couldn’t bring myself to take the soft option and owed it to the organiser to finish what we had planned and so the lights went on, the head went down and I set off into the darkness. The first 30km were fine but slow as I tried to get moving again but I had to employ a cautious approach on the pothole riddled roads as any malfunction at this stage would probably mean a night sleeping in a hedge. I kept moving and felt very surreal as I rode along pitch black country lanes in silence and with no points to focus on further up the road it felt like I wasn’t even moving at times.

One final climb up Hilltop Lane followed by a long, cold descent  and I was back in the city and my next target was Regents Park which at this stage of the ride felt like home. I got into the house just before 2AM on Monday morning having left London around 3pm the previous Friday. London-Paris-London in around 60 hours, I was quite happy. After a late night curry, a shower and a quick stretch I was relieved to climb into bed.

Overall it was a great weekend with very few bad patches and physically I was fine in the days after however on Monday I felt like I was daydreaming and the surreal feeling stuck with me for most of the day.

Thanks again to Alan for planning this and to everyone else who made it an easy trip.